Popular microblogging and social media platform Twitter, via its blog, announced that the company will be making changes to the way users can flag and report harmful or abusive tweets or content on their platform.

The company wants to overhaul the reporting process in order to make it easier for people to report what exactly occurred. Earlier, the company used to ask the user in what way they felt the tweet violated Twitter guidelines. Instead, the user will be given the freedom to describe in their own words exactly what violation occurred for which they are flagging the content.

Replacing the old existing series of menu options, the new selection asks the user to choose why the tweet is harmful or wrong according to its content, as opposed to Twitter’s own complex terms of service. 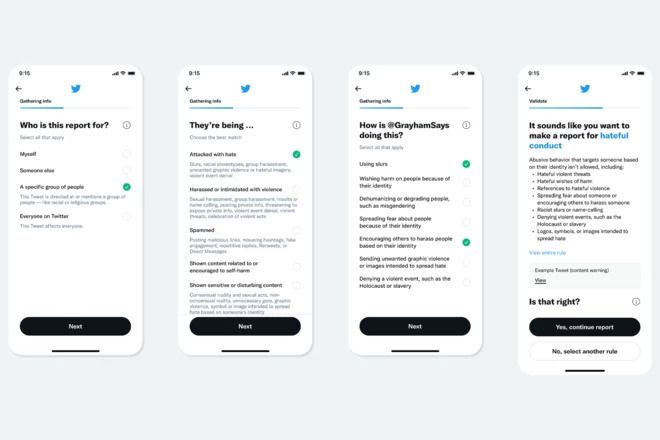 Using this method of reporting, Twitter hopes to also gather data on the content that might not necessarily be violating existing guidelines but is still flagged by users, in order to help restructure the company’s policies in the future.

According to Twitter’s blog about the change, this type of approach is a “symptoms-first” approach. For instance, suppose you break your leg, the doctor is very unlikely to directly ask, is your leg broken? Instead, a more subtle approach would be to ask the patient, where does it hurt? Instead of directly asking the patient to diagnose the issue, the approach will be to find out what’s happening to the patient.

Twitter is currently testing out the feature on a group of select people in the USA. According to their analogy, instead of asking the person to interpret the violation and then report which category it falls under, Twitter wants the user to explain what happened, according to which the social media platform will take appropriate action.

By shifting the focus of reporting towards the unique experience that the person experiences, Twitter hopes to see a significant shift in the quality of reports that it receives. For now, the feature is accessible to only a limited number of people, but should be released globally by early 2022.

Since taking over as CEO, Parag Aragwal has already proposed a host of changes in order to improve and cater to user safety. Just last month, the company announced its plans to prohibit the sharing of “personal media” such as photos and videos without the consent of the person.